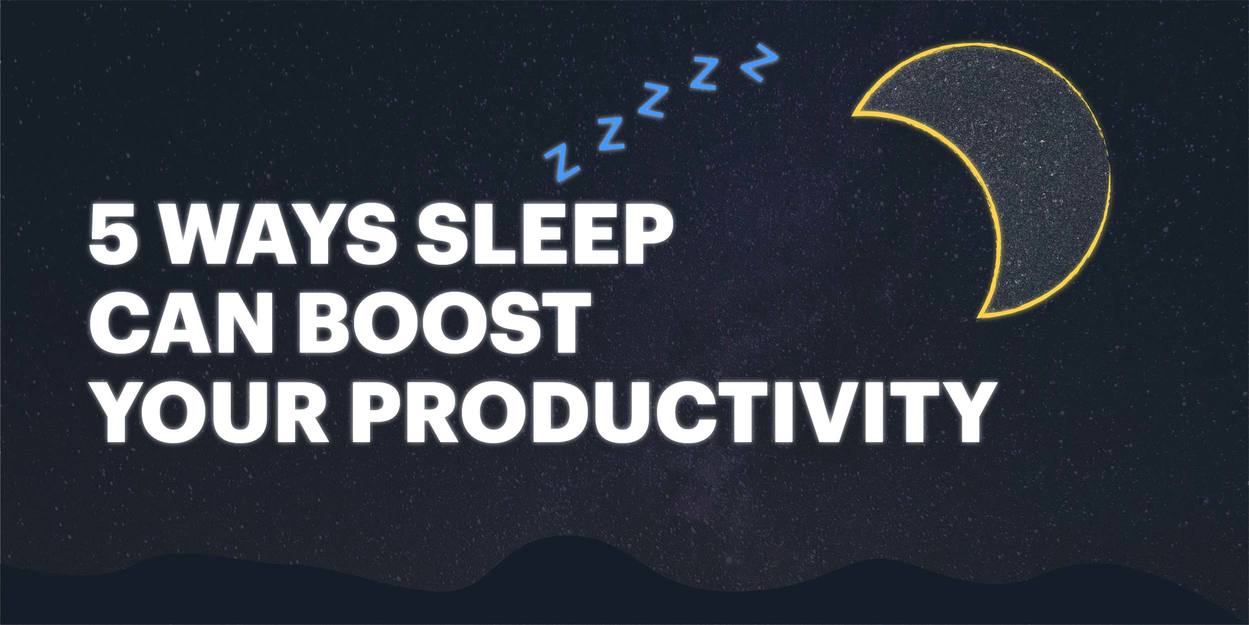 5 ways sleep can boost your productivity at work

When you're tired, it affects everything you do. You can't concentrate, you can't focus, you have trouble listening and retaining information—it's the worst. That's probably why sleep deprivation costs the U.S. economy somewhere in the region of $400 billion dollars every year.

That's why one of the most important things you can possibly do to stay productive is to get a good night's sleep. If you're not convinced yet, here are 5 great reasons to get a decent amount of shuteye.

When you're tired, your mind has less energy to devote to simple things like processing sensory inputs. The technical term for this is vigilance.

I'm sure you're familiar with attention tests that prove we only see what we're focusing on, ignoring 90% of sensory input. Even if you aren't, it's common sense. After all, there's so much going on that, if we were paying close attention to all of it, we'd quickly be overwhelmed.

When you're tired, you're less vigilant, and vice versa. When you get a good night's sleep, it's takes far less effort to focus. You're also able to focus for longer periods of time without your attention wandering or getting distracted.

Sleep-deprived brains are more reactive, especially to negative situations. It's theorized that this mechanism exists to keep you safe. Your brain doesn't know why you didn't sleep well, so getting a bad night's sleep puts you in permanent fight-or-flight mode. Levels of key hormones that regulate emotion go down, and levels of stress and panic hormones go up, so when crunch time rolls around and you're placed in a stressful situation, you're more likely to crumble.

It's also been shown that people with even a minor level of sleep deprivation react differently to other people, and they're more likely to take things in a negative way. So if you're in charge of others, especially if it's your job to keep them motivated and productive, losing sleep doesn't just affect you—it affects everyone on your team and everyone around you.

Conversely, when you've got a decent night's rest, you're more likely to be emotionally stable and capable of reacting to changing situations, as well as more personable with your colleagues.

Being tired has the same effect on our minds as being drunk, and the effects increase the longer you go without sleep. In fact, being awake for as little as 24 hours has been shown to affect the mind in the same manner as several glasses of wine. If you wouldn't show up to work drunk, then how can you justify making decisions when you're tired?

Not only that, but decision-making can be up to 50% slower when you're tired because of the increased delay in accessing and processing information. If you're in a role where you're regularly making decisions, whether that's for your team or simply the project you're working on, you could be adding unnecessary hours to your total working time.

Our prime healing time is when we sleep. Our bodies heal the damage done during the day, repairing muscles, replenishing fat and sugar stores that our bodies use as energy, as well as working through and sorting the events of the day.

It's when we're sleeping that our brains place things into long-term memory, from where it's readily accessible. What this means is, if you've gone through a heavy day of new knowledge but don't enjoy a good night's sleep, you'll to retain far less of the information than you otherwise would. That means more time having to revisit information you've already learned once, or even potentially making decisions based on incorrectly remembered information.

If you're at all interested in your long-term health, setting up a good sleep schedule is going to be a keystone habit. It increases your effectiveness in everything you do.

We've all faced difficult situations and problems that we just couldn't seem to solve, and we've all been given the advice to "sleep on it."

As much as you might sigh and roll your eyes, it turns out that this is sound advice.

As previously mentioned, sleep is the time your mind sorts through the events of the day and decides which memories to keep and which to discard.

As part of this process, our minds compare our current problems with our past experiences, and as we're asleep, our minds are free to dive deep into the subconscious and freely associate without passing judgment on what we're thinking about.

That's why it's common to wake up with flashes of inspiration or new ideas, and why sleeping next to a notebook is recommended by so many creatives and industry leaders. You might capture your next great idea first thing in the morning after a deep, restful sleep. Try it—after all, what do you have to lose?

So there we are: 5 major reasons why sleep is important for productivity at work. Start tonight! Get a good night's sleep and feel the difference tomorrow.

Be even more productive with Lucidpress. Create content, collaborate & approve documents in mere minutes with our free desktop publishing software.

Sarah Jones is the sleep ninja behind Sleepy Deep, a blog encouraging proper sleep health. We spend one third of our lives asleep, so why not make the most of it?

What is a digital asset manager?

As secure technology becomes more important in business, there's a growing need for new roles to manage all this new IT. One such role is the digital asset manager.